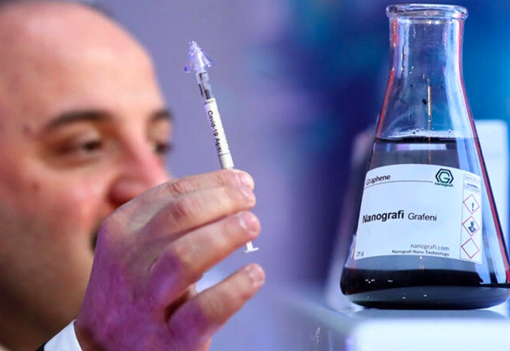 Huge improvement in both vaccines and industry!

Industry and Technology Minister Mustafa Varank said "1 of the 10 countries that produce a graphene series that is 200 times more resistant than steel, hundreds of times more conductive than copper; flexible and lightweight; is now Turkey,". Regarding domestic vaccination studies, Minister Varank stated that human trials will start in April.

Industry and Technology Minister Mustafa Varank, said that the efforts to develop the first intranasal vaccine that will be applied as a spray through the nose is ongoing in Turkey. Varank added, "Since the vaccine administered through the nose follows the way the virus infects people, it is predicted that this technology will fight the virus more effectively. If and when all clinical stages are complete, we aim to introduce this new type of vaccine within the year."

Minister Varank attended the opening ceremony of the "Graphene Mass Production Plant" in Ankara İvedik Industrial Zone. Minister Varank expressed their pride in bringing an important investment to the country in the production of advanced technology materials. Stating that one of the main sources feeding the groundbreaking technologies is advances in material science, Varank said, "Graphene, introduced to the world by materials science in 2004, made a great impression with its physical, chemical and mechanical properties. Graphene is a material that is 200 times stronger than steel, hundreds of times more conductive than copper, as well as flexible and lightweight. It can be used in many different industrial areas with its strength, flexibility, thermal and electrical conductivity features. It is shown as one of the most critical components of nano technology as a two-dimensional nanomaterial with the thickness of a single atom. Thanks to graphene; longer-lasting materials, ultra-fast rechargeable batteries, faster and lighter aircraft, and bionic devices that can connect to neurons in the body will be produced. In addition, bioelectronic medical technologies that provide real-time treatment by reading and changing body electricity will be developed. With this advancement, solutions can also be brought to the problems of corrosion, heating and transmission. "

"WE WILL FIGHT THE VIRUS MORE EFFECTIVELY "

Minister Varank reminded that Nanography firm, while successfully working in the field of nano technology, started working in the field of vaccines during the pandemic. Varank said, "Scientists operating under the Nanograph roof are developing an innovative vaccine type which unlike conventional vaccine will be administered as a nasal spray. With the infrastructure, scientific skills and academic experience of METU, Hacettepe, Gazi and Ankara University, we are continuing Turkey's first intranasal domestic vaccine development work. Unlike mRNA and inactive vaccine technology, this vaccine has been designed on a protein-based basis. Since the vaccine administered through the nose follows the way the virus infects humans, it is predicted that this technology will fight the virus more effectively. It has the potential to strengthen our hand in the possible progressing course of the epidemic."